What Promise Does Blockchain Offer to Ecommerce Today? Businesses are literally done every second of the day.

Data, goods or services are exchanged in the process of every transaction and a successful transaction is only based on how easy, fast, and precise it is for the participating bodies.

In recent time, Blockchain has become a Holy Grail for a lot of businesses seeking to execute more of these transactions in the most effective and efficient way. Simply put, it is a digital ledger that monitors and protects digital transactions.

In the financial sector, the introduction of Blockchain technology has built a new found trust in banking customers because of its promises of a highly secured system and lower transaction cost, but these banks benefit just as much.

Accenture research shows that Blockchain technology could potentially save banks 8 to 12 billion dollars annually from reducing infrastructure cost for 8 out of 10 of the world’s biggest banks by an average of 30%.

A 2017 report shows that 69% of banks are already experimenting with Blockchain. While half the numbers of these banks are working with fintech companies to promote their Blockchain agenda, 30% of them have opted for the consortium model.

However, despite Blockchain’s ability to revolutionize both financial and nonfinancial industries, it has been met with some hindrances that have restricted its widespread adoption.

For starters, some Blockchain solutions could be complicated to use.

For example, the process of transferring 1 ETH would require more than half a dozen steps which could be discouraging to non-technical people.

Setting up a Blockchain system could be just as hard.

Unlike assembling a wifi network where you just need to plug a few cables, assembling a working Blockchain solution still requires you to hire a team of developers to get it up and running. It’s shaping more like AI redesigning the way professionals work today.

At the moment, Blockchain’s processing speed still has a long way to improve, but even with these limitations, the pros are still overwhelming.

With Blockchain’s global market projected to be worth 20 billion dollars by 2024, a lot of businesses are looking to cash in and one industry that will be staking and winning big is the ecommerce industry.
Blockchain offers ecommerce a more efficient enterprise model with an optimized ecosystem and secured business process. It’s time emerchants thought about blockchain for the future ahead. See this infographic to learn more.

I am Roberto Garvin, co-founder of Mofluid. It is absolutely amazing to see how technology continues to evolve, from email to browsers, search engines and mobile. I am fortunate to witness it all and I'm really excited to see what’s next! 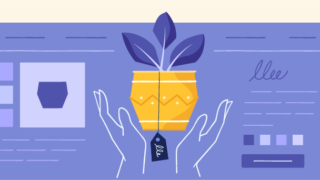 Top 8 Reasons Why You Need a Custom eCommerce Website

4 Easy Ways to Drive Traffic to Your Online Store [Infographic]